Here Be Dragons: Sailing In The Komodo Islands

There’s no better way to explore the islands, waters and wildlife of Komodo National Park than aboard a luxuriously appointed sailing ship reminiscent of the old spice traders 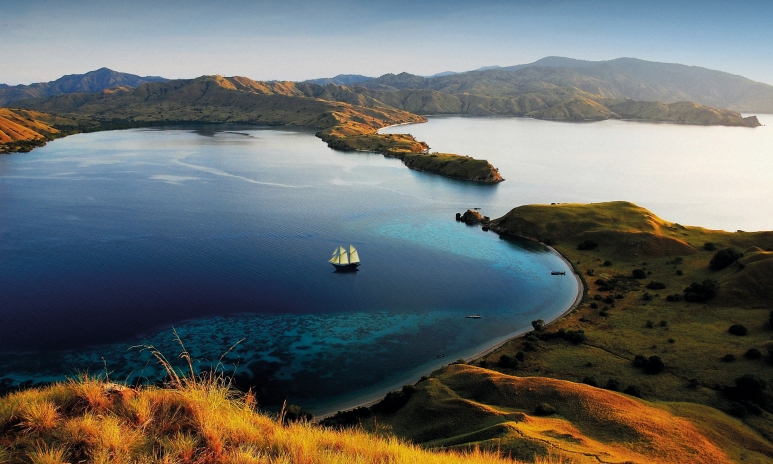 Komodo National Park, which lies within Indonesia’s Sunda islands, is a World Heritage site and home to the Komodo dragon

The big male Komodo dragon has turned its back on the half-stripped deer carcas that hangs invitingly from a tree. Now he has eyes only for me. My fellow travellers show signs of amusement but, as he swaggers my way and the guides shepherding small tourist groups edge back, nervously deploying their crooks, I’ve an inkling the threat might be all too real.

Growing up to three metres in length, Komodo dragons are the world’s largest lizards and have been known to knock down pigs and deer with a swish of the tail, but it’s the other end that worries me: jaws said variously to contain venomous glands and a noxious concoction of bacteria that will bring down a water buffalo. 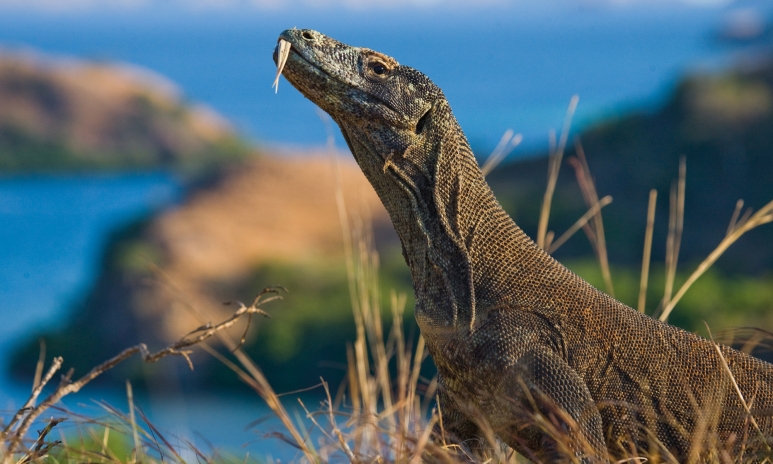 Komodo dragons are the world’s largest lizards, growing up to three metres long

The name Komodo conjures images of a lost jungle-cloaked island kingdom and Fay Wray in the clutches of a great ape as he battles a fearsome reptile, and it was indeed W Douglas Burden’s 1926 expedition to Komodo Island that provided inspiration for the 1933 movie sensation King Kong. Legend has it that these fabled beasts are descended from a female lizard born of a human mother.

This dragon, perhaps calculating the distance between us and sensing the proximity of the park guides’ potent crooks, lifts his chin high in the air, pumps up his chest and with a disdainful flick of the tongue turns back to the kill. The moment and the opportunity to collect the ultimate trophy in my selfie cabinet have passed. 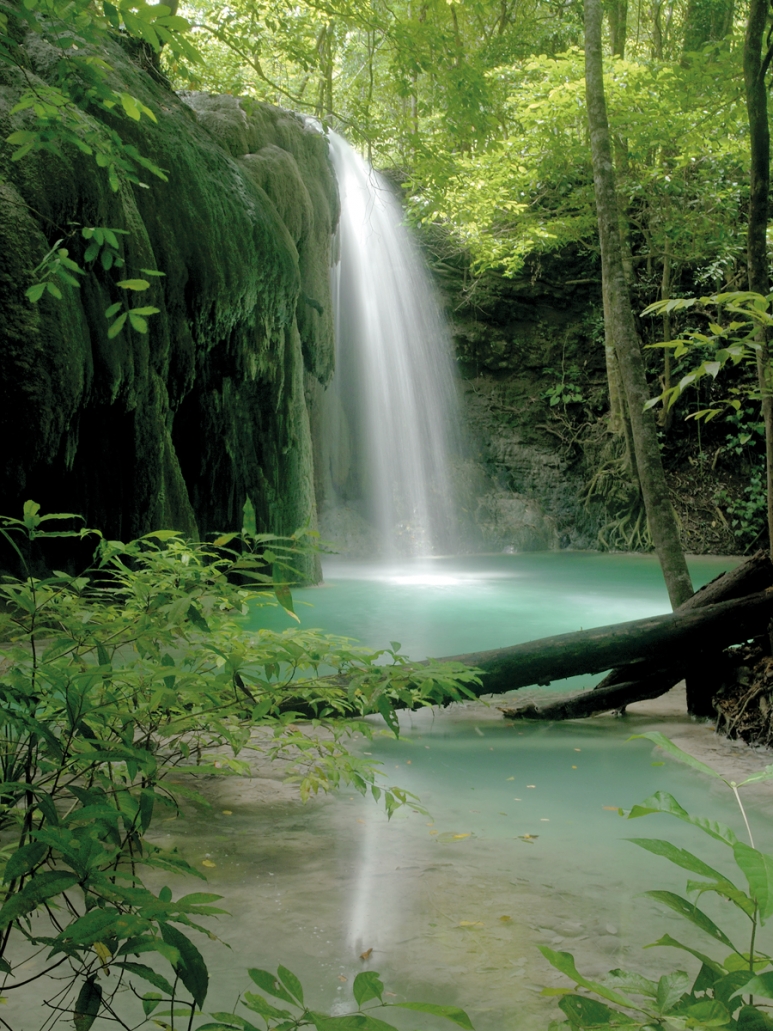 This waterfall is one of the attractions on Moyo Island

Just 3,000 dragons remain in the wild, inhabiting the Indonesian islands of Komodo, Rinca, Flores, Gili Motang and Padar. Komodo National Park, established in 1980 to protect the reptiles, was declared a Unesco World Heritage site in 1991. The archipelago is part of the Coral Triangle—the tropical waters spanning Indonesia, Malaysia, the Philippines, Papua New Guinea, East Timor and the Solomon Islands—and the dragons are far from the only endangered species to be found here. The once pristine and still crystal-clear waters, now sadly blighted by a rising tide of plastic, harbour some of the richest marine biodiversity on earth, along with diving sites that are the envy of the world. 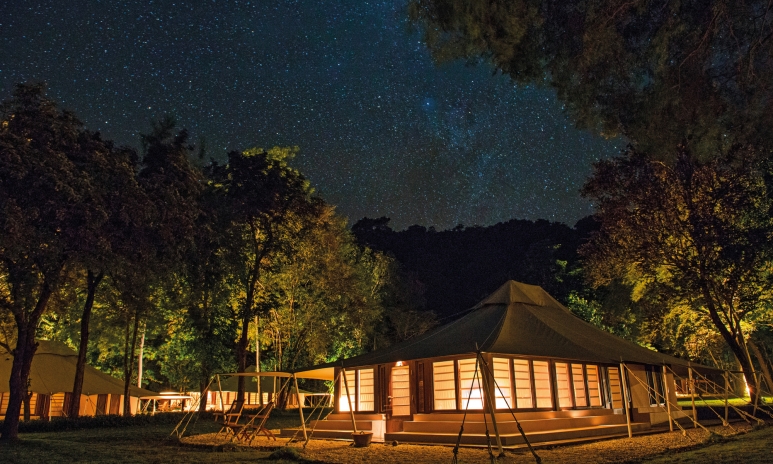 Stop for a night on land in the Amanwana “ocean tents”, a luxury tented wilderness hideaway on Moyo Island

An airport on Flores serves as a gateway to the region and the starting point for our expedition. Resembling a spaceship landed in the jungle, the new terminal, which opened in December last year, stands as a testament to the expectation of a large influx of tourists, raising capacity from 150,000 passengers to 1.5 million a year. On arrival, though, ours is the only plane on the tarmac and it’s soon apparent that the locals have yet to master the art of airport hospitality. After five minutes hanging around the plane on the runway, we wander over to the terminal. This, we know, can only be a good sign for those in search of an unspoilt travel experience.

While the islands and coral of Komodo National Park can be explored from a growing number of luxury resorts, the best way to discover the region is by boat—and our ship, it seems, has come in. The Amandira is a purpose-built, two-masted sailing vessel constructed on a beach in the traditional way by the Konjo tribe, closely following the design of the phinisi ships that have long plied Indonesian trading routes, which themselves are based on the pinas introduced by the Dutch East India Company to facilitate the spice trade in the 1600s. 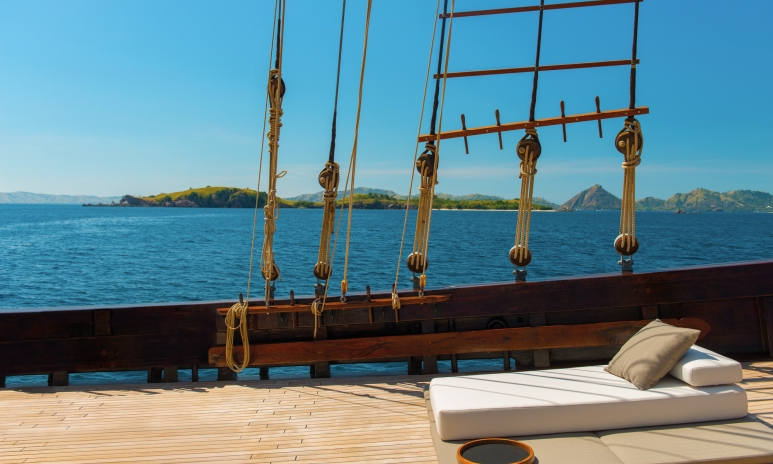 Two years in the making, commissioned at an estimated cost of US$5 million by a Swiss tycoon whose identity our Scottish cruise director declines to divulge, the 52-metre craft is operated by Aman and has been described as a luxury diving charter boat. I prefer to think of it as the pirate ship of my boyhood dreams and waste little time in scaling the mast and taking the plunge from the bow (two experiences that might have proved less unnerving a decade or two ago; Peter Pan, it seems, I am not).

Bigger than its commercial cousins, the boat offers copious space, with large deck areas for dining, dive preparation, massage and relaxation—space that over the next five nights and six days we utilise to the full. The five cabins include a luxurious master suite above deck so tantalising that it provokes good-natured squabbles between members of our party vying for its environs. Two deluxe cabins provide similar accommodation below deck, while a pair of bunk cabins hosts four more guests. When one of our companions asks to sleep on deck under the stars, that too is arranged. 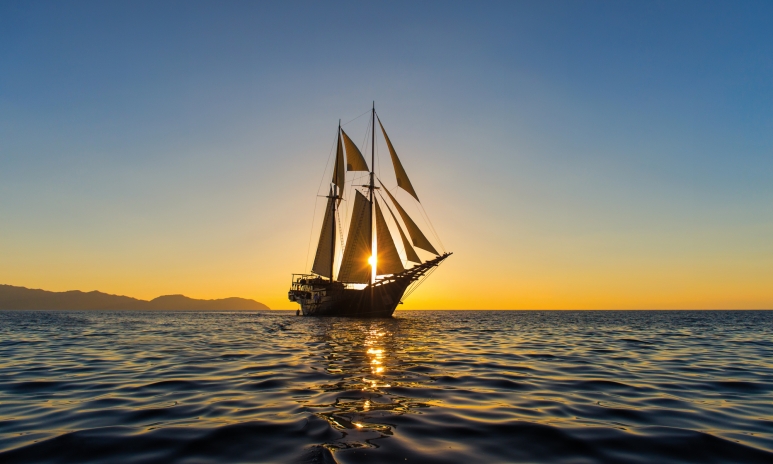 An itinerary for the voyage is tailored prior to arrival or on embarkation. Ours includes champagne sunsets and moonlight-bathed dinners on deck, sunrise island trekking and gourmet beach dining in secluded coves lit by hundreds of candles, activities on the water and adventures beneath the waves, breathtaking encounters with wildlife and the rare chance to stargaze and ponder nature’s beauty from the comfort of our deck loungers. It is a once-in-a-lifetime adventure. Just don’t get eaten by a dragon.